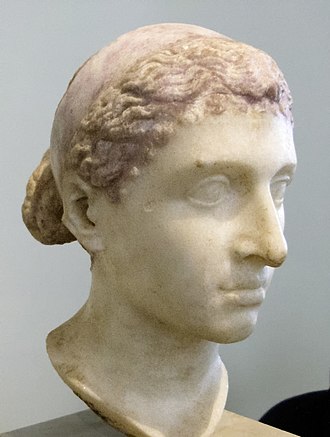 With fewer than 100 days remaining before the election of the next President of the United States, and all indicators pointing to a “win” on the part of the first – even if only nominally – female candidate, it is worth examining at least one of history’s more prominent women heads of state, and how her experience might provide a glimpse of what we can expect as Americans.

Those of us who have paid attention to the campaigns of the Second Wave Feminist Movement since it began in 1966 with the founding of the National Organization by a group of lesbians have watched to see when a viable, woman candidate for the American Presidency would appear.  It has been a source of bitter disappointment for many women to see that the best they could come up with is Hillary Rodham Clinton, a woman in name only – WINO.

A popular bumper sticker during the period reads:

Cleopatra, for example.   Ascending to power together with her sickly, milquetoast husband and brother Ptolemy XIII, who quickly died and was replaced as brother–husband and co–emperor by an equally ineffectual Ptolemy XIV, who also conveniently dies, leaving her sole ruler of Egypt while she carries on an affair with Julius Caesar and by whom she bears a son, Caesarion.  After Julius Caesar is killed by a conspiracy of powerful Romans, Cleopatra’s romantic interest quickly shifts to Marc Antony.   When Antony is forced to commit suicide after losing the Battle of Actium to the forces of Julius Caesar’s grandnephew and adopted son Octavian, she kills herself with an asp rather than face the people she has betrayed and then be paraded by Octavian – later renamed Augustus Caesar – through Rome as his personal trophy.

It is impossible to not see the similarity between the decayed condition of what remained of Alexander the Great’s empire in Egypt after thirteen generations of Ptolemies and the advanced putrefication of the United States after thirteen generations of “We the People…”[1]  And, just as Cleopatra prostituted herself to the most powerful Roman generals of opportunity, Hillary Clinton has sold her soul and, well, never mind, to the Globalist central power cabal and positioned herself to sell her country out in the bargain, being a member in good standing of the Council on Foreign Relations which has, as chief sponsor David Rockefeller proudly and personally affirms, been for decades orchestrating the establishment of a one–world government under which there would be no Constitutional Republic like the United States of America in existence – anywhere.  A colony or province called Amerika, perhaps, but no more “free country.”

There can be no doubt as to the pains such a cartel will take to ensure that their warmed–over Cleopatra is placed in position to execute their final, Grand Design.   Up to and including assassination of her remarkably strong rival, Donald Trump.

And, just where is this One–World Wonderland based?  At the power centroid of the European Union, the all–Europe “country” made up of the same districts that once comprised the Roman Empire.

Imagine the shock that feminists will suffer when they discover that, after three generations of activism and social “progress” that their ultimate standard-bearer and first female President of the United States has turned out to be a Judas Goat, leading them and otherwise healthy women into the slaughterhouse of Islamic oppression awaiting them in the New World Order.

Stay tuned for the grand, triumphal parade, with Hillary proudly smiling and waving “So long, suckers!” to her former, “fellow” Amerikans.   At least her predecessor had enough sense of shame to kill herself.

Before Stonewall.  The Making of a Gay and Lesbian Community, 1984. Co–directed by Robert Rosenberg, and co–produced by John Scagliotti and Rosenberg.

[1] The Romans had, by this time, become highly skilled at identifying countries in advanced states of decay and how best to wipe them from the face of the Earth, as they had done with the Phoenician Empire at Carthage 110 years earlier.  Why not use the same experience base now?  Please see also “The One, Two,…..Three–War Plan” at usaishistory.com.