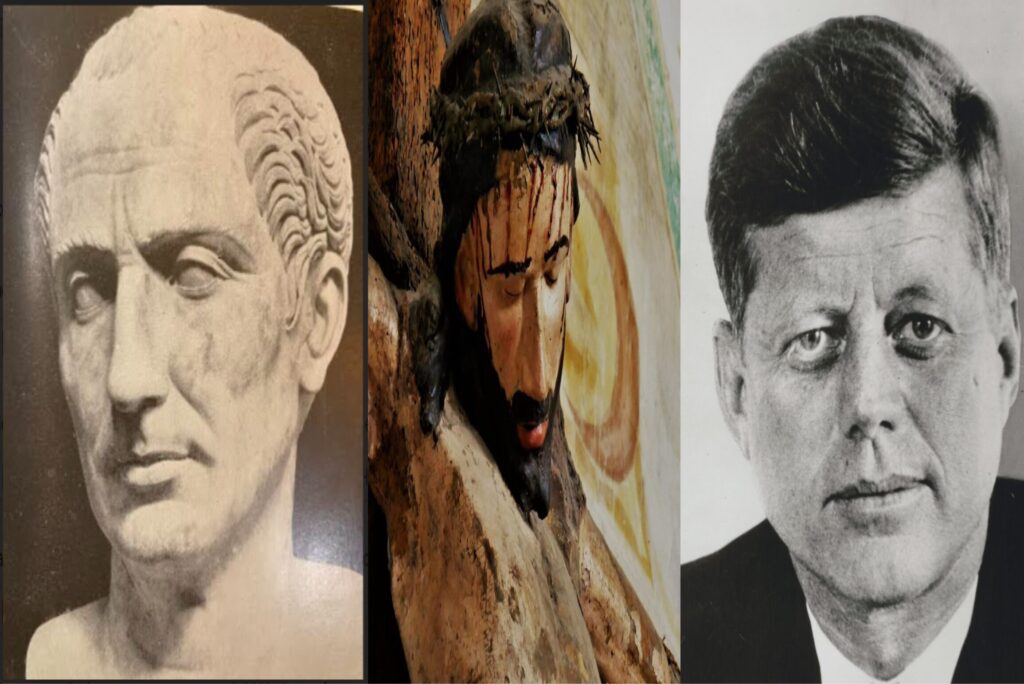 What could the assassinations of Julius Caesar, Jesus Christ and President John F. Kennedy possibly have in common?

First, the motives for killing them were much the same. All three tried to make life better for the disadvantaged people of their times. They all threatened the established power elites of their times. And, thirdly, all were killed by conspiracies.

History famously records Julius Caesar’s “friends” conspiring to stab him to death after luring him to meet them at the Roman Senate. One of William Shakespeare’s most famous plays dramatizes the entire affair in its preparation and aftermath. It is also a matter of record that all of the men who not only conspired but also stabbed Caesar soon were forced to kill themselves. All had been the rich and powerful of their time and had no sympathy for Julius’ plan to make life better for the lower classes. In the civil war that followed, Caesar’s nephew Octavian defeated all opposition and came to be known as Augustus Caesar and ruled over the most peaceful and prosperous period of Roman history, known as Pax Romana, “The Peace of Rome.” Those familiar with the story presented at Christmastime will remember that it was this same Caesar Augustus who reigned at the time of the birth of Jesus Christ.

Seven decades later Jesus would arouse the same resentment in the ruling religious leaders of Judea. The standard operating procedure of the Romans upon taking over a new area was to gather the religious leaders and explain their new role in keeping the population under control. They were given full freedom to conduct their worship as long as nothing was done to subvert Roman control. So, when Jesus appeared and openly challenged Rome’s Jewish puppets, the Pharisees and Sadducees, it was only a matter of time before they would succeed in conspiring to have him lynched by the Roman government. Unlike the United States, Rome and virtually all other governments in history have had no “separation of church and state.” Roman emperors were the head of not only the state, but of the Roman pagan religion, with the interesting title “Pontifex Maximus.”

So, now that we all know that Julius Caesar and Jesus Christ were killed by conspiracies, does that make us “conspiracy theorists?” Or, were they the last to ever be killed by conspiracies? No, and no. Especially since powerful people learned to be very careful not to have happen to them what happened to Cimber, Brutus, Cassius, Cinna, Casca and Minucius. According to Nicholaus of Damascus “Everyone wanted to seem to have had some part in the murder…” but after all had been done to death, the lesson learned by the rich and powerful forever after was to take whatever pains necessary to conceal their involvement whenever they found it “necessary” to kill a head of state. The last Roman emperor to actually expand the borders of her empire was Carus, and, though supposedly killed by lightning during a storm in 283 C.E., Edward Gibbon comments on “the arts practiced to conceal the manner of [his] death.”

Sixteen centuries later, and after dozens of “regime changes” by assassination, an idealistic, highly–educated and popular young man becomes president of the United States of America, and immediately becomes the target of conspirators who resent his friendliness to African–Americans, his reluctance to commit American troops to warfare in Southeast Asia and jeopardizing the profits coveted by the arms industry – excuse me, “Military Industrial Complex,” his establishment of a “hot line” direct telephone connection to the Kremlin, his opposition to replacing the country’s silver–based currency with paper Federal Reserve Notes, his plan to “smash the CIA into a thousand pieces,” and his opposition to federal funding for Catholic parochial schools

There is no argument over who orchestrated all of the conspiracies – “plots” in England to recover the country from Protestantism after Henry VIII broke with the Vatican. The Ridolfi, Duke of Guise, Babington plots against Elizabeth I, the Gunpowder Plot against King James I and all of members of Parliament – all of which were discovered and thwarted illustrate the lengths to which people will go to kill a head of state, and in every case it’s small–time fanatics or “patsies” taking the fall for someone much higher up, in these cases, the Pope and his personal secret police, the Company or Society of Jesus. Nor is there any doubt that Abraham Lincoln was killed by a conspiracy of Catholics resentful over their side, the South, having lost the American Civil War. Though John Wilkes Booth did shoot and kill the President, writers and editors of popular history have subtly made him the “patsy” by placing the entire focus on him, while John Surratt, the leader of the conspiracy safely fled the country and landed a cushy job at the Vatican serving as a Papal Zouave – while his flunkies George Atzerodt, Lewis Paine, David Herold and his own mother Mary are hanged.

The most effective “art” used since these ancient assassinations has been the use the “patsy”, either to actually execute the murder “up close and personal” with a dagger or poison. Since the advent of reliably accurate firearms it has become practical to position some gullible flunky up close with a firearm while a professional marksman fires from a more distant concealment making absolutely sure of the kill. In the excitement and confusion caused by the gunfire of the “patsy” the professional hitman does his work and safely escapes. And, the rich and powerful people who paid for their services and benefitted from their efforts live out their lives completely immune from suspicion. Most recently, the assassinations of Anton Cermak, 1933, (Giuseppe “Joey” Zangara shouts slogans and pretends to shoot at Franklin D. Roosevelt while a professional marksman shoots Cermak); Huey Long, 1935 (still not completely solved); John F. Kennedy, 1963; Malcom X, 1965 (by a sham religious group created make it look like it was his own people); Robert F. Kennedy, 1968 (Sirhan firing a .22 and creating chaos in front while a professional kills him from behind with a .38); Martin Luther King, 1968 (shot by a sniper “Raoul ” (?) from a rooming house window next door to where James Earl Ray had been conveniently lodged by Raoul on a pretense of a gunrunning operation). Only the most narrow or closed mind is unable to see the work of four snipers, a bewildered patsy (Lee Harvey Oswald) being rubbed out by a small–time mobster (Jack Ruby) a mountain of books, films and other misleading media perpetuating mass confusion and hiding the truth for over 50 years without being aware of an enormous conspiracy, or “plot” transcending government, organized crime, the Roman Catholic Church, the defense industry, mass media – and the CIA.

And John F. Kennedy, Jr., his wife and sister-in-law blown out of the sky in 1999 after it became clear that he planned to expose his father’s and uncle’s killers? Come on!

Chicago Mobster Sam Giancana said “We do it this way every time. You’d think people would catch on!” For this and other unwise talk, he, too would be murdered in 1975, the day before he was to testify before Congress on just this subject area. His grisly murder is another crime that has never been solved.

It’s interesting to note that the word “patsy” is derived from the Italian word “paccio,” for “gullible person, sucker.”

Can it be that the same Roman forces that killed both Julius Caesar and Jesus Christ had no misgivings about conspiring and killing an American president 2,000 years later? And keeping it covered up for going on three generations to avoid the same fates as Cimber, Brutus, Cassius, Cinna, Casca and Minucius?

So, for all who wish to evade having to face this uncomfortable reality, there is a new book soon to be published called JFK for Dummies, by a Canadian crime writer named Garry Rodgers.